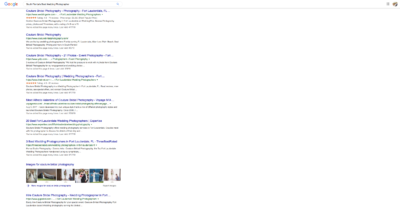 I’ve been promising a video on how I perform SEO on my websites to get my wedding photography business Couture Bridal Photography to show up on the first page under a variety of searches. This is my first video of many parts to come relating to SEO (Search Engine Optimization).

Why is SEO so important?

SEO is a way of optimizing your website so that search engines can rank it to show up in the results people are searching for. The importance of SEO is crucial for the success of any business. The way Google ranks a website, page, image or blog post is based on the content meeting the needs of the searcher. When Google sees content that people are searching for and you are delivering the content thats most informative, it ranks you up.

The act of optimizing your website so that it ranks for a wide variety of searches will lead to more clients finding you and requesting your services or goods. SEO is one of the reasons, Couture Bridal Photography has become one of the most popular wedding photography studios in South Florida.

SEO (Search Engine Optimization) is the act of creating content, photos, and topics based on keywords which lead to search engines ranking a particular website. The use of keywords, content, good website programming and user experience are used to create an environment that allows searchers to find a particular subject. I have used a variety of SEO tactics to make my business such as Couture Bridal Beauty to quickly rank and display in search results leading to business growth. SEO for photographers is the first part of a series of videos to help fellow creatives.

Author: Alfredo Valentine
I am a South Florida based portrait, lifestyle, boudoir and wedding photographer. I love destination weddings and travel. I love photography and I have my own unique approach to photography and post processing

363 thoughts on “SEO for Photographers”